A downloadable game for Windows, macOS, and Linux

Forget-Me-Not is a BL (boy's love) visual novel exploring the relationship two boys, Emmett and Michael, over a course of time.

Long ago, Emmett used to be extremely withdrawn and hated socializing. Michael had just moved into his neighborhood and wanted somebody to talk to. In a short, strange course of events, they met on a rooftop and talked for a little while. Emmett soon grew attached to the complete stranger, opening up and may have even considered him a friend. However, the summer friendship ended when Michael moved away, but left Emmett with a problem he realized he could overcome.

The dreamlike memory of the boy became so blurred to him, that when the same boy transfers into his homeroom sophomore year, he doesn't recognize him at first!
They rekindle their friendship, which they quickly become close friends…to something a little more than friends. Emmett feels content with the way things have gone for them, but he can't ignore the strange feeling that something isn't right with Michael. There are things he doesn't know about Michael, even coming so far in their relationship, that he can't figure out so easily. What isn't Michael telling him?

“Overall the story was really sweet but also substantial. I felt that I really came to know the characters by the end. Obviously lots of love was put into all the characters, not just the two main boys. The heavy subjects were dealt with sensitively but not in a Very Special Episode kind of way, they just felt like real stuff that happens to real people." - xiaomao @ LemmaSoft


“What a WONDERFUL, truly groundbreaking visual novel. It touched on so many big issues that most VN's don't tackle, and it did it well. It was totally realistic and believable. They were two likable, flawed, and really human characters that pulled you into the story. The plots and dialogue all rang true and went beyond the superficial to get at the real heart of many issues that teenagers, and maybe people in general, face." - Dawnfire @ LemmaSoft

Story and art by:

Whew, it's been a long time, but I'm pleased to say that Forget-Me-Not is complete and released to the public!

I want to than everyone for their abundance of critique, love, and support over the years and it means so much! This project has really come a long way and I'm happy to finally see it released. Even though this isn't groundbreaking or anything, not only did I learn a LOT while making this VN, I also had a lot of fun seeing it reach the end of it's release. In the future, I hope to improve in any other works I decide to create.

BE WARNED, there are some things in this game that may not be suitable for everyone!!! Though there is no visually explicit or detailed scenes, there are some parts of the game where certain sensitive subjects are addressed.

If you are unsure about having to read something about that, please don't force yourself to play this game.

There are three scenes with a flashing effect that's a little bit straining. If you're worried about that, please ask me to upload a separate file without the flashing effect, I'll be glad to do so.

To anyone who ends up playing this, I really hope you enjoy it, I've put in a lot of effort and will be grateful for any kind of feedback. 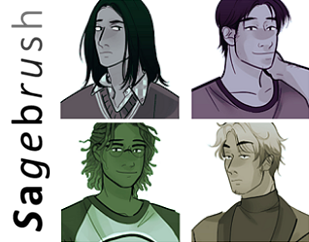 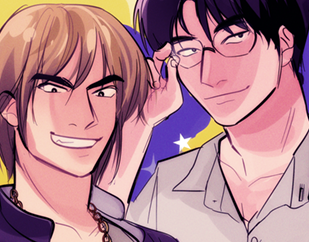 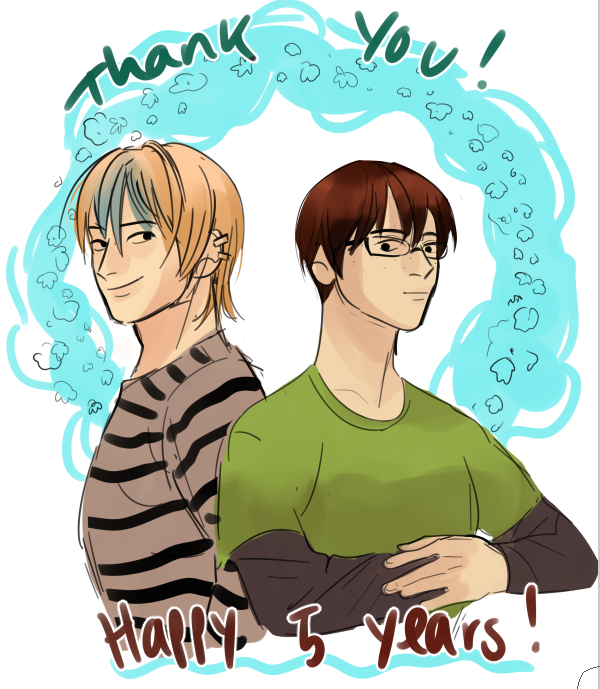 Around August of 5 years ago, I released Forget-Me-Not to the world, and as of today, the game has been downloaded around 2900 times here on itch.io! The support and love the game has received since then has and always will continue to mean so much to me. Thank you to everyone who has played, and everyone who will play in the future! Have a wonderful rest of the year. :-)

I don't know if this is just my laptop but the file isn't opening on my mac? I managed to unzip it but when i click on the actual game it won't open. Is there anything I should be doing or? I'm sorry to bother you but I've played this game before and absolutely love it, so I'd love to play it again haha.

Hi there!! Unfortunately I'm not familiar with mac computers, but it should be the "forgetmenot.py" file to open up the game. You could also try the file in: "forgetmenot-2.0-all\forgetmenot.app\Contents\MacOS" and see if that one will open instead. Other than that...I'm unsure as to what the problem is. T_T You could try re-downloading the package as well and then retrying to see if it makes a difference too. Sorry if that's a little unhelpful! As a last resort and it's still not working, you can try playing the online version! http://sandbox-adventure.com/forget-me-not.html

Hopefully it works out!

I tried the second option about finding the file and it worked! I'm so happy I absolutely adore the game and I can't wait to play it. Thank you so much!!

Oh my god I am so glad I found this again!! I played this a couple years ago and it was such an amazing game that really stuck with me. I couldn't remember what it was called and couldn't find it since my computer broke and I wasn't able to save the game files and stuff. This game actually made me cry and is so amazing.

AHH oh my gosh, your comment is so sweet and meaningful to me, you have no idea. I'm so happy that you wanted to replay it even years later. T_T I'm also so glad you managed to find it again though, haha. Thanks so much for your comment, and thanks for playing! 🙏😁

Omg, i love it so much. All the emotions.

AH I'm super late but I appreciate your comment so very much!!! Thank you so much for playing <3 🙏🌸

I've loved all of your work since the day I found it!

You're welcome. I really enjoy the vibe you create in your stories. Your characters are so easy to connect to. Your ability to make readers get so absorbed in your character's natural personalities is amazing. I can't wait to finish the rest for Sage Bush and good luck with everything. I LIVE... LOVE LOVE LOVE

This is a great game... is there a walkthrough to get all three endings?

Is one of the endings considered the "best" ending?

Thanks so much, I'm glad you're enjoying it! Also, here's a walkthrough if you need it.

As for the endings, there's an old blog post I had that goes into depth about my interpretation of the endings. There's a slight spoiler in it, soif you'd rather read it when you're done with the whole game, to sum up, I consider all the endings as alternate realities in a sense since I don't like "bad" endings in VNs.  I think though, if you'd have to consider which one is the best, it'd be three, but you have to complete both endings 1 and 2 to get to 3. Hope that helped, & thanks for playing! ^^

Gah... the link to the walkthrough looks broken. Is it working for you?

Thanks for all of that, and for this great game!

Yeah, unfortunately as of this week it looks like my VN dev blog might be down for good (the vnovel hosting was provided by someone in the visual novel community, but it looks like they might not be hosting sites anymore) BUT there is hope yet!! Thank God for the wayback machine X'DD You can still find the walkthrough over here: http://web.archive.org/web/20170729170141/http://rosewatergames.vnovel.com/forget-me-not-walkthrough/ Hope this is helpful!!

I always forget about the WBM. Thanks! Looks like it worked!

you did a great job!Fitting OST and interesting characters.

Thank you so much, I appreciate your praise!!! I'm so glad you enjoyed the game and liked the music as well 🌸😊

Aww, thank you so much for your comment!! It makes me so happy you enjoyed the story. 💕

it was so pure and life like scenario i felt the pain and rush of each and every character! i was beautiful, i even cried a little

Thank you so much for your kind comments, I apologize for taking such a long time to respond! I'm also so sorry you cried haha, but I'm very happy to hear that you enjoyed the experience of the game! Thank you so much 😌✨

either I am very stupid and have no idea how to open the game...or my laptop just doesn't want to work with me...

(Anyone know how to simply explain the steps to get it to work?)

THIS IS PURE ART, I CRIED REAL TEARS WHEN I FINSIHED

I downloaded the game and played it in the middle of the night, which I mostly regret. There were a lot of scenes that made me want too yell, and the story has such a great script, it's like they're talking too you sometimes! I love the characters, plot, ect. Honestly, this is probably one of my favorite VN ever, and I especially love Emmett, I just feel emotionally drawn too some of the situations and emotions he feels. Thank you for releasing such an awesome game! It deserves more attention. <3

I recently just finished this vn and how much I love the story and its compatible illustrations. It face us, the young generation, to the issues we often avoid; such as bullying, social acceptance, the meaning of friendship and when it changes, and honesty to your own self.

Pardon me, but their dynamics remind me to an AU of Connor x Evan from Dear Evan Hansen :')

Besides its loveable ending, I can't help the assumption about the title ("forget me not" flower) correlating to the bittersweet of Emmet and Michael relationship :') 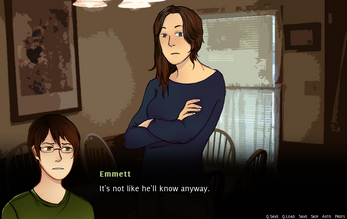 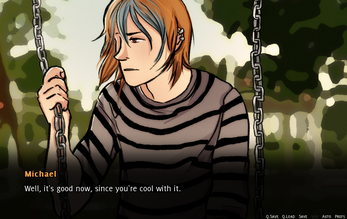 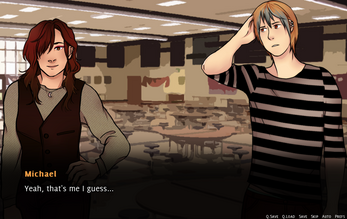 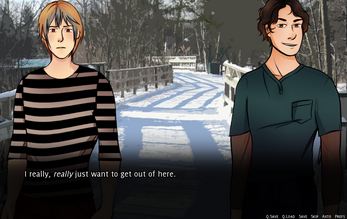