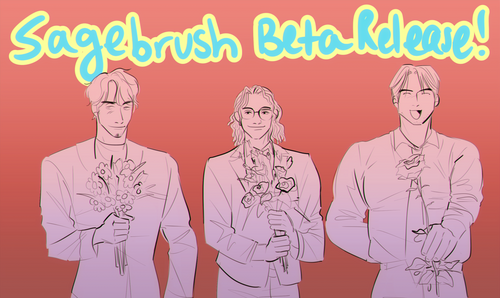 Yep, it's time!!! I've been hard at work trying to get the rough beta release out for patrons, and I'm excited to announce that things are moving smoothly and I'll be able to release it by tomorrow, just in time for Valentine's Day! 💕

As usual, the download will only be available for $5+ patrons, but I'll also be giving the download for $1 patrons who've been around for a long time. Alternatively, if you've ever been a patron in the past, or bought anything from itch.io or my etsy previously, I'll also happily send a file your way! (Most of those people I'll be contacting personally, but feel free to send me a message if you don't get a message by the weekend.)

Afterwards, I'll be working on getting the public demo updated with the new art and edited narrative. There's still a LOT of work to do before I can completely release the game, where some of the tasks I have left to do are: lining/coloring all the CG, making an ending credits video/animation, making a trailer video, and organizing/creating content for the artbook. This year I'm planning on getting a bulk of that done, so crossing my fingers!! 👍

Also, I've launched a twitter for Rosewater Games, so please give that a follow if you have a twitter! As I'm getting a lot of assets done, I'll be posting a lot of sneak peaks and in depth information as I progress with the game.

Thank you to all of my patrons and all of you who've played the demo and supported me this project the years. I'm really excited to finally get closer to truly releasing this project! 🌸

The love, life, and existential crisis of a soon-to-be college dropout